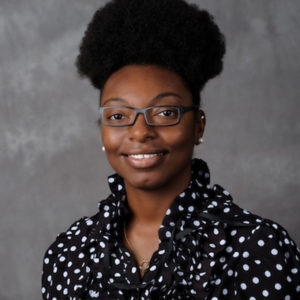 Courtney loves talking with everyone in the office and with students; while at work she’s very extroverted, Courtney considers herself very quiet and loves her alone time as an introvert.

A fun fact about Courtney:

A piece of advice:

Courtney, who’s from and lives in High Point, graduated from UNC-Charlotte in 2015. While a student, she began working at the campus’s alumni center. Courtney was going to pursue another career path, but on the day she was considering taking another job, Courtney got a call back from the hiring manager and said it felt to her like a sign that this was the right job for her, and she continued working for the office after graduation. Later, however, her position at UNC-Charlotte was eliminated, so Courtney applied to be an administrative assistant at the OPCD because the role sounded similar to her previous one. Now, Courtney says that decision led her to even more opportunities, because she’s seen how much Wake has to offer. After working with Courtney for a while, OPCD Associate Vice President Lee Svete and Office Operations Manager Vicki Keslar envisioned the administrative assistant role evolving into something bigger, which has allowed Courtney’s part in the operations team to expand. In addition to being the first face greeting students when they come into the office, Courtney also works with event planning, strategy, and logistics.

The Office of Personal and Career Development is committed to empowering every Wake Forest student to flourish in work and life. Through career coaching, events, workshops, courses, career treks, fairs, self-assessments, and much more, we seek to make sure EVERY Wake Forest student has the tools, resources, information, and most of all a partner to navigate the college-to-career transition.

Find us on campus map